Next
Push button for menu

A Funeral Home in Clintonville, Wisconsin.... 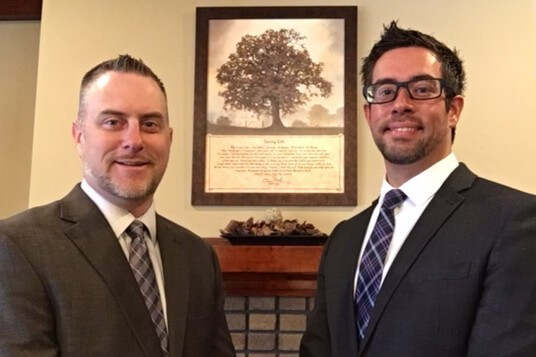 Our fourth generation business began in 1914 when Otto C. Eberhardt moved to Clintonville from Plymouth, WI to open his furniture and undertaking business in downtown Clintonville. Otto ran the business until his death in 1948 at the age of 60.

His son, Roy Eberhardt had joined him in business in 1945. Roy moved the funeral home to it's current location at 53 N. Main Street and hired a partner, Oscar Hoh. The business was re-named Eberhardt-Hoh Funeral Home and Furniture Store.

In 1970, Roy's son Paul Eberhardt joined his father and Mr. Hoh in business. Upon Hoh's retirement, the firm was changed back to Eberhardt Funeral Home in 1974. Also, at that time Roy and Paul opened a second location in Marion at 1029 N. Main Street. The furniture half of the business was eliminated, and Roy Eberhardt retired in 1980. Paul hired David Berger and the business was re-named Eberhardt-Berger Funeral Homes.

In 1983 Scott Stevenson joined the business, and it was re-named once again as Eberhardt-Stevenson Funeral Homes. In 1999, Paul's son, Andy Eberhardt, became the fourth generation to enter the family undertaking business. Paul Eberhardt moved to a semi-retired status in January of 2002, leaving Scott and Andy as the owners of Eberhardt-Stevenson Funeral Homes. In 2013, Scott's son, Troy relocated his family from Lodi, CA to join the firm. In January of 2015, Scott moved to a semi-retired status, leaving Andy Eberhardt and Troy Stevenson to represent the family funeral home. 2020 saw Scott Stevenson transition to fully retired, and the opportunity to purchase stock in the corporation was presented to the second-generation Stevenson. Today, Andy and Troy own and manage all aspects of the firm.

Cremations in Clintonville and Marion...

With the gradual increase of families in the area requesting cremation, Scott and Andy decided to invest and install Clintonville and Marion’s only crematory in 2009. Stevenson stated, “Prior to our crematory installation, we had to rely on an out-of-town crematory. “Now, Andy and I will be able to personally follow through with every detail of the cremation service as we do with a traditional funeral service. This is just another way we want to show our commitment to total care from our family to yours.”

Troy and Andy strive to offer the consumer a wide range of choices in all aspects of traditional funeral and cremation services. Pre-planning, at-need or aftercare arrangements are offered to individual need. The pair attempts to add a personal touch to each funeral service.

Eberhardt-Stevenson offer many options including, pre-planning, through certificates of deposit or through life insurance. They offer traditional and cremation caskets, burial clothing, urns, keepsakes, and items addressing other needs and desires covering a wide range of prices fitting the consumers requirements no matter what the budget.

"I just want people in this community to know they can count on us when they need us. Troy, and I always have, and always will, work very hard to earn their trust and respect."

As Funeral Directors, we herewith fully acknowledge our individual and collective obligations to the public, especially to those we serve, and our mutual responsibilities for the proper welfare of the funeral service profession.

To The Public We Pledge: vigilant support of public health laws; proper legal regulations for the members of our profession; devotion to high moral and service standards; conduct befitting good citizens; honestly in all attempts of service and merchandise, and in all business transactions.

To Those We Serve We Pledge: confidential business and professional relationships; cooperation with the customs of all religions and creeds; observance of all respect due the deceased; high standards of competence and dignity in the conduct of all services; truthful representation of all services and merchandise.

To Our Profession We Pledge: support of high educational standards and proper licensing laws; encouragement of scientific research; adherence to sound business practices; adoption of improved techniques; observance of all rules of fair competition; maintenance of favorable personnel relations.